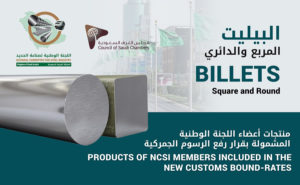 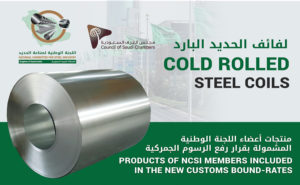 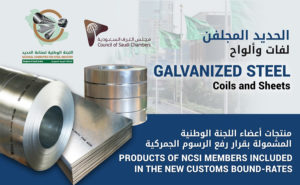 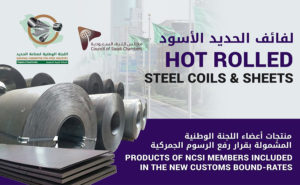 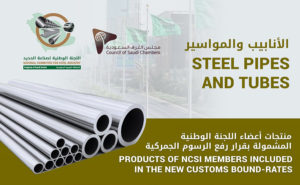 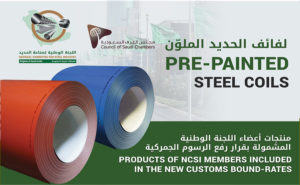 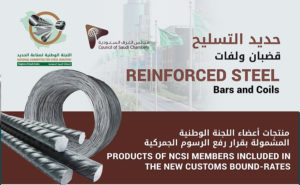 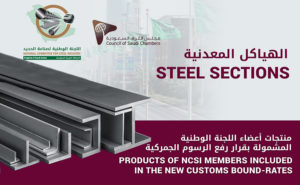 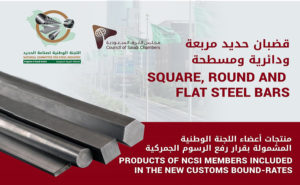 Riyadh – July 5, 2020: As the implementation of the new customs duties started on June 20, 2020, which was approved by the Council of Ministers being imposed on select imports after careful review by relevant authorities, Engineer Rayed Abdullah Al-Ajaji, Chairman of the National Committee for Steel Industry, created by the Council of Saudi Chambers, lauded the resolution to increase customs duty on products listed by the General Customs Authority, including steel products up to the originally approved bound-rates as stipulated in the Kingdom’s Protocol of Accession to the World Trade Organization (WTO) signed more than 15 years ago.

Al-Ajaji stated that “the Resolution was reached following thorough and comprehensive research by numerous government agencies, taking into consideration the status of domestic industry in terms of production capacities, market size, imports, import quantities and types, their effect on market equilibrium and fair competition, under the free market principle which guides the Kingdom since the creation of the modern state of Saudi Arabia”.

Jassem Abbas, Vice President of the National Committee for Steel Industry, representing reinforcement rebar and wire rod production companies, commented that “this Resolution will catalyze the national industrial and commercial economy as a whole at the domestic level by restoring market equilibrium and reducing the effect of unjustified excessive imports which grew tremendously over the past years, driven by reduced Saudi customs duties over an extended period of time, which are even lower than what is applied in the exporting countries. For example, Turkey imposed customs duty of over 18% on Saudi steel imports entering Turkey, while Turkish steel exports to the Kingdom were historically taxed 5% only. The same applies to all other countries exporting to the Kingdom”.

On his part, Ahmad Al-Shanqiti, Executive Director at the National Committee for Steel Industry, representing flat steel manufacturing companies, pointed out that “raising customs duty was in line with the original agreement as provided in the Kingdom’s Protocol of Accession to the World Trade Organization, intended to create the required balance and ensure justice for the national products”. He also emphasized that “when the Kingdom decided to apply customs duty rates that are lower than what is provided in the Protocol, the Saudi national industries were not as strong and viable as they are today, and their evolution to the levels they have now reached warrants reconsideration of the low customs duties”.

Ahmed Al-Ghamdi, Executive Director and Head of the Committee’s Steel Bridges and Sections Unit, added that “the Resolution to increase customs duty will inevitably enable national factories to utilize their idle production capacity which was impacted over the past years due to market disequilibrium, particularly that the utilization rate of some steel factories decreased to lower than 30%, while others totally discontinued certain production lines”.

Abdulaziz Al-Dosari, Executive Director of the Steel Pipes Unit said that “what distinguishes national steel industries is that they have sufficient production capacities capable of catering to domestic demand, and that the overall national steel industry had suffered over the past years from unfair competition by foreign imports as a result of dumping practices in terms of quantity, price and quality. This cause damage to the national industry to an extent that can no longer be overlooked The Resolution provided a tool to remedy this discrepancy”.

Orance Al Otaibi, Member of the National Committee for Steel Industry, representing welded steel pipes production companies, stated that “the resolution will definitely push towards creating jobs and enabling Saudization. It will also create an attractive investment environment for national and foreign investments. It will also support he higher goal of the domestic content, pushing towards preference of the domestic product and increased contribution of national industries in government procurements”.

On the expected price increases of products subject to higher customs duty, Mohammed Al Jabr, Vice Chairman of the National Committee for Steel Industry said that “shallow thinking may lead to this outcome. However, the Kingdom has since its creation has maintained a free market economy governed by supply and demand, with many domestic producers and production surpluses of most dutiable products, along with continued imports. In addition, the Kingdom has agreements with multiple parties, including the Arab League and the Gulf Cooperation Council Agreement, which allow exemption of imports; All of this will create a natural, fair and proportionate competition that ensures an automatic price equilibrium. Therefore, the effect of the Resolution on higher prices will be minimal, particularly when compared to the higher level goals, such as enhancing national industry, creating jobs, and providing an attractive environment for investments capable of bolstering the Kingdom industrial and economic status.

In conclusion, the Chairman of the National Committee for Steel Industry and Committee Executive Directors, expressed thanks and appreciation to the Custodian of the Two Holy Mosques and the Crown Prince for their wise directives and guidance intended to support the national economy. They also thanked all government entities, mainly the Ministry of Industry and Mineral Resources, Ministry of Commerce, Ministry of Finance, General Customs Authority, and the General Authority for Foreign Trade for their contribution to this effort and sovereign national resolution intended to enable national industries and promote the Kingdom’s national economy, which is relied upon my many to achieve the Kingdom’s Vision 2030 aimed at diversifying sources of income and increasing non-oil sector contribution to the gross national product.